Over the recent years, the City of Alexandria has seen an great increase in local economic activity. From the addition of the PTO in the early 2000’s & the NSF in 2017, to the new Virginia Tech Campus just south of Four Mile Run, Amazon has joined the list of key players driving growth in Northern Virginia.

The year-long search for the perfect campus is over, and Amazon has decided to build one of two new headquarters in Crystal City of Arlington, VA. Many recall cities offering big incentive packages, and others remember the cactus that Tuscan, Arizona shipped to Amazon’s first headquarters as a “pick me” gift, but most are likely to remember the economic impact that is predicted to come in the years after Amazon’s arrival. The tech giant estimates that the surrounding areas will benefit from approximately $3.2 billion in tax revenue over the next 20 years, in addition to their $2.5 billion investment in Northern VA. 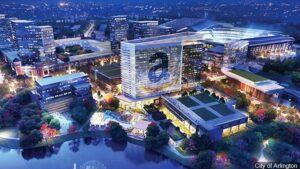 Amazon is creating approximately 25,000 well paying jobs, nearly 10,000 more than the PTO and NSF created combined when they first moved to the area. Back in the early 2000’s, the newly added 15,000 jobs created the initial momentum for the economic development that we currently benefit from today in Northern VA, and one can only image the impact of nearly 25,000 new jobs coming to the area. Some area’s, specifically Crystal City, have seen a $4-$6 psf increase in office asking rents. Some Landlords are taking advantage of this, and are pricing their office space very competitively in the areas surrounding Crystal City. If you’re looking for prime office space in Alexandria, take a look at our available space page here!